Elastic Stack is an amazing and powerful collection of four open source projects –Beats, Elasticsearch, Logstash, and Kibana. Despite each one of these four technologies being a separate project, they have been built to work exceptionally well together. Elastic Stack is a complete end-to-end log analysis solution which helps in deep searching, analyzing and visualizing the log generated from different machines.

Elasticsearch is developed alongside a data-collection and log-parsing engine called Logstash, and analytics and visualization platform called Kibana. The three products are designed for use as an integrated solution, referred to as the “Elastic Stack” (formerly the “ELK stack”).

Elasticsearch can be used to search all kinds of documents. It provides scalable search, has near real-time search, and supports multitenancy. Elasticsearch is distributed, which means that indices can be divided into shards and each shard can have zero or more replicas. Each node hosts one or more shards and acts as a coordinator to delegate operations to the correct shard(s). Rebalancing and routing are done automatically. Related data is often stored in the same index, which consists of one or more primary shards, and zero or more replica shards. Once an index has been created, the number of primary shards cannot be changed.

Elasticsearch uses Lucene and tries to make all its features available through the JSON and Java API. It supports faceting (filtering, navigation) and percolating (The percolator field type parses a json structure into a native query and stores that query) which can be useful for notifying if new documents match for registered queries.

Another feature is called “gateway” and handles the long-term persistence of the index; for example, an index can be recovered from the gateway in the event of a server crash. Elasticsearch supports real-time GET requests, which makes it suitable as a NoSQL datastore, but it lacks distributed transactions.

Shay Banon created the precursor to Elasticsearch, called Compass, in 2004.While thinking about the third version of Compass he realized that it would be necessary to rewrite big parts of Compass to “create a scalable search solution”. So he created “a solution built from the ground up to be distributed” and used a common interface, JSON over HTTP, suitable for programming languages other than Java as well. Shay Banon released the first version of Elasticsearch in February 2010.

Elasticsearch BV was founded in 2012 to provide commercial services and products around Elasticsearch and related software. In June 2014, the company announced raising $70 million in a Series Capital funding round, just 18 months after forming the company. The round was led by New Enterprise Associates (NEA). Additional funders include Benchmark Capital and Index Ventures. This round brings total funding to $104M.

In March 2015, the company Elasticsearch changed their name to Elastic.

In June 2018, Elastic filed for an initial public offering with an estimated valuation of between 1.5 and 3 billion dollars.

Due to the concept of Horizontal scaling, we can virtually add an infinite number of nodes in an ES cluster to give it a lot more strength and indexing capabilities.

Types of search in Elasticsearch

Elasticsearch is known for its near real-time searching capabilities and the flexibilities it provides with the type of data being indexed and searched.

A match query will find all three documents when searched for Ball hit. A proximity search can tell us how far these two words appear in the same line or paragraph due to which they matched.

When it comes to an analytics engine, we usually need to run analysis queries in a Business-Intelligence (BI) domain. When it comes to Business Analysts or Data Analysts, it wouldn’t be fair to assume that people know a programming language when they want to visualize data present in ES Cluster. This problem is solved by Kibana.

Kibana offers so many benefits to BI that people can visualize data with an excellent, customizable dashboard and see data interactively.

At the core of Kibana is Interactive Charts as shown below: 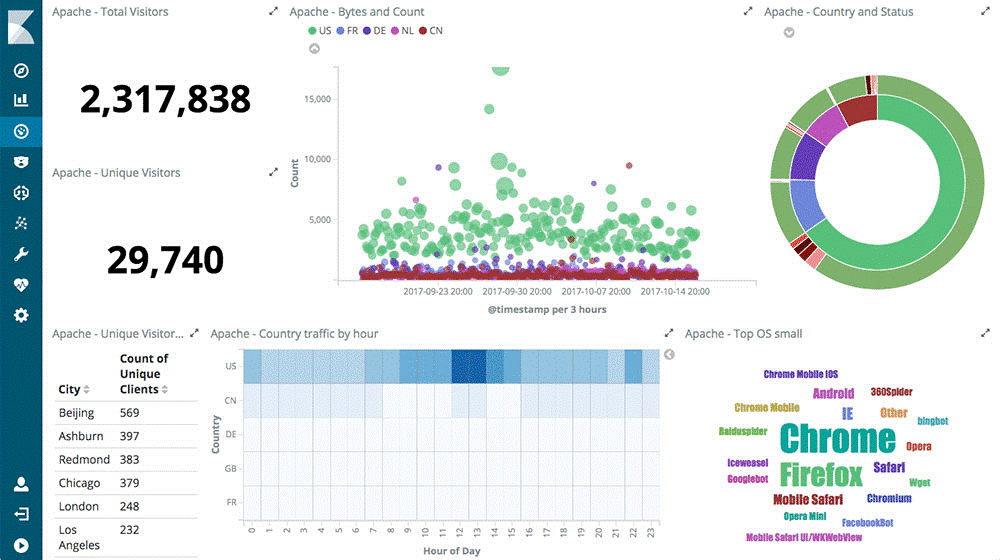 Kibana comes supported with various type of charts like pie charts, sunbursts, histograms and much more which uses the complete aggregation capabilities of ES.

Kibana also supports complete Geo-Aggregation which allows us to geo-map our data. 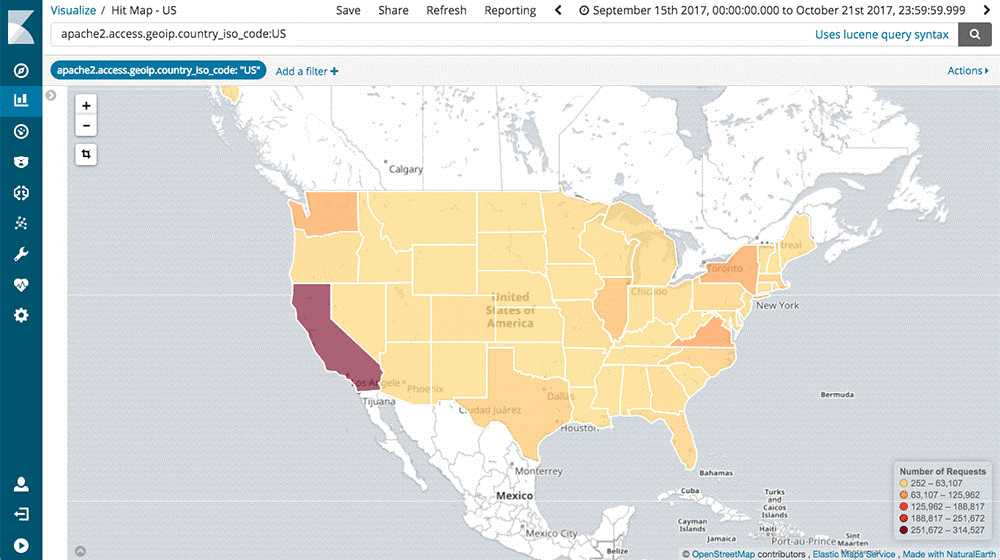 With Kibana, it is also very easy to share dashboards to a much wider audience without doing any changes to the dashboard with the help of Dashboard Only mode. We can easily insert dashboards into our internal wiki or webpages.

Dev Tools refers to the development tools that aid the developer. In Kibana, it is used for the Console UI, which provides a simple yet clean interface to access API queries using the REST API exposed by the Elasticsearch client. Console allows us to make any API call from a web browser. Its interface gives us a clean way to make a call and generates JSON in a pretty print format, which allows you to view results in a neat way. It works on top of an HTTP layer of an Elasticsearch cluster.

Upon clicking Dev Tools, you will be greeted with the Console UI, as shown in the following screenshot: 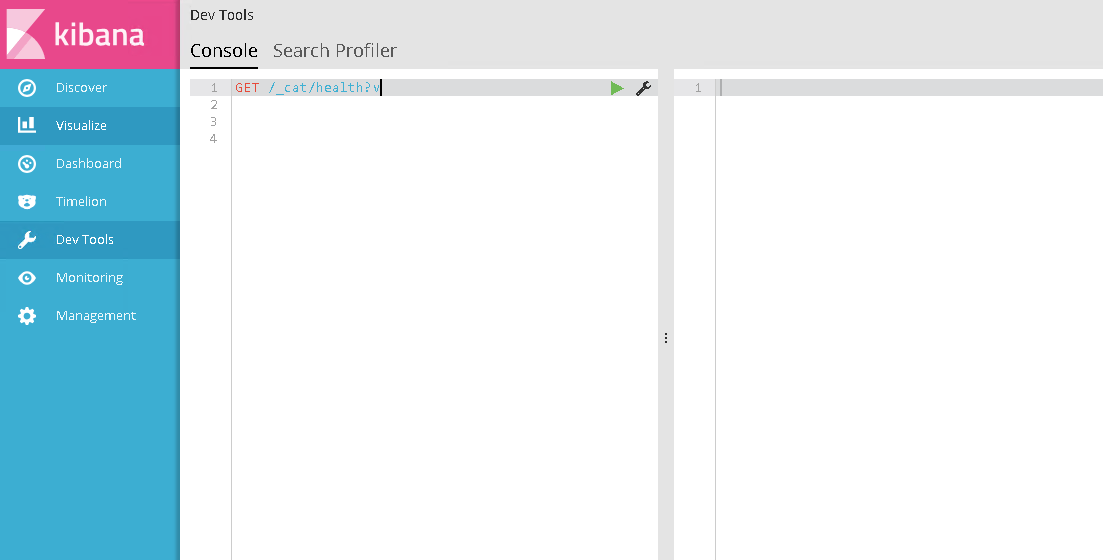 X-Pack is an Elastic Stack extension that bundles security, alerting, monitoring, reporting, and graph capabilities into one easy-to-install package. While the X-Pack components are designed to work together seamlessly, you can easily enable or disable the features you want to use.

Prior to Elasticsearch 5.0.0, you had to install separate Shield, Watcher, and Marvel plugins to get the features that are bundled together in X-Pack. With X-Pack, you no longer have to worry about whether or not you have the right version of each plugin, just install the X-Pack for the Elasticsearch version you’re running, and you’re good to go!

You can view the monitoring data from Kibana where it’s easy to spot issues at a glance or delve into the system behavior over time to diagnose operational issues. In addition to the built-in status warnings, you can also set up custom alerts based on the data in the monitoring indices. 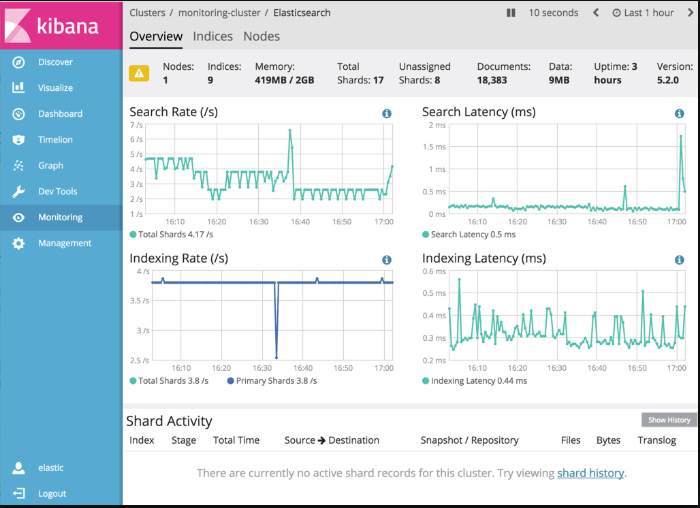 Designed and Developed by UIdeck